My friend, a one-time avid tango dancer and current expat in Germany, has been staying with me for a few weeks. She burst into the living room one evening and said she was having persistent heel pain. She thought she was landing harder on her left (non-dominant) heel because every time she took a step on her left foot, the heel hurt. Worse, every morning her feet froze into stiffness. The morning walk to the bathroom was closer to the arthritic shuffle of an elder than a fit 42-year old. “Can you help me Ms. Alexander Technique Reembody Expert?” she asked.

Usually we tend to be a bit ginger with our non-dominant leg*, so I was curious to watch her walk. 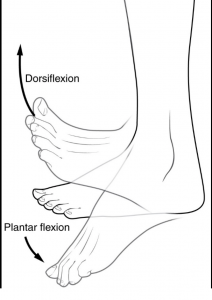 I observed that she was not landing harder on her left heel. Instead, she had a habit that almost everyone has with their non-dominant ankle: weak plantar flexion. Plantar flexion looks like pointing the foot, but the movement happens at the ankle joint, not the forefoot or toes. The result of weak plantar flexion is that you end up pushing down on the ground with your forefoot, the same way you push down on a gas pedal. This pushing action can cause hammer toes, which she was starting to develop, and tight plantar fascia.

Dare I say the terrible word that we all fear…plantar fasciitis? In a way, my friend was lucky that she hadn’t diagnosed herself with a case of this. There is little doubt that if she had thought she had something as dreaded as plantar fasciitis, the pain, the inflammation and the physical compensation patterns would have all multiplied due to a sense of bodily threat.

I had her sit down on the carpet and we compared her ability to plantar flex the right and left ankles. Sure enough, the movement was smooth as butter on the right side, but feeble and hard to organize on the left. After some trial and error, and a little Alexander Technique hands-on  help, the left side got the hang of it.

She got up and walked. The left leg was behaving differently.

“I don’t want to give you too much cueing,” I said. “Too much thinking will interfere with coordination.”** But then I gave her one cue. I couldn’t resist. “Notice if you are pushing down with your left forefoot. Don’t do that. No gas pedal foot.” 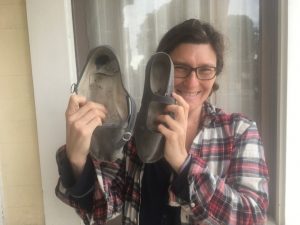 Two days later she came in, excitedly waving her shoes. “I have a story to tell,” she said. “See! Look,” and she pointed at the shoe wear. The right sole had a dark indent from hard heel strikes, the left none at all. She reported that in just two day of practicing plantar flexion, the heel pain was gone, and she was no longer waking up with stiff feet. The absence of the morning hobble felt strange. She had grown so used to it.

How is it possible to change a habit and come out of pain so quickly? We are taught in all disciplines that changing habits takes repetition, practice, attention and a lot of time.

Sometimes, when we discover efficient ways of moving, it’s as if the new pattern already existed, perhaps as something we did when we were children, before tight shoes or tango shoes and life’s pressures caused us to grip. Perhaps this is an issue of neuroplasticity, which turns out to be faster, more flexible and more adaptive than one could ever imagine.

“Plasticity happens rapidly…too fast for the brain to grow new connections. It’s more likely that unused pathways are unmasked when sensory inputs are changed, as from wearing a blindfold for five days. Over time, such plasticity changes can become permanent.”
(p.86, The Body Has a Mind of It’s Own, Blakeslee & Blakeslee, 2007)

Still, how could two years of chronic pain dissipate in two days? Researchers know that pain can diminish long before tissues fully heal, and debilitating pain can occur in the absence of injury due to an over sensitized nervous system (p. 71 Explain Pain, Bulter & Mosely, 2013). Reduction in threat mediates both the experience of pain and tissue inflammation. If the new way of moving provided more security than the old way, a feeling of safety may have been enough to reduce the pain and inflammation. Maybe.

I admit that the above paragraphs are speculative, but instant sticky change has been my experience learning and now teaching aspects of the Reembody Method alongside Alexander Technique. Admittedly, quick lasting change doesn’t always happen. This is not a problem. The slow method, which include mindful awareness, steady practice, concentrated thinking about causes and conditions, and artful contingency plans when triggers trigger, well, that’s great stuff. It works. As a teacher, I like to have a variety of tools in my box

*Imagine having to step up on to a high a ledge. What if you were also carrying a bag of groceries? Which leg would you use to step up? Most people would choose their dominant leg because it feels stronger and more secure. We tend to push with our dominant leg and baby our non-dominant leg.

**If you try and swing your arms in opposition to your legs as should happen naturally when walking, you will probably find that you have no idea how to walk.